The diamond often steals the stage when it comes to gemstones. Whether it’s a wedding ring, a jewel heist in a movie script, or a metaphor in a pop song, the diamond always seems to get the most attention. But if you’re celebrating a birthday this month, you should be proud of the ruby as your birthstone. It is equally fascinating and has earned its fair share of the spotlight.

What Makes a Ruby

The ruby is one of only four gems considered to be a precious stone, along with diamonds, sapphires and emeralds; all other gems are classified as semi-precious. The mineral we call a ruby is a type of aluminum oxide known as corundum, and mostly derives its red color from the presence of chromium. Their color ranges from light pink to a dark, vivid crimson, with the brightest (and most-valuable) shade referred to as pigeon’s blood.

When it comes to hardness, rubies are rated at 9.0 on the Mohs Scale, making them the third-hardest gem on the planet (behind diamonds and moissanite).

While rubies are found in a number of sites around the world, they can also be manufactured through a process called flame fusion. Because of their hardness and light wave transmitting properties, these synthetic rubies are used commercially as bearings and thread guides in industrial equipment, to make lasers and masers, and for uses in watches and compasses.

Aside from their modern uses, rubies have been highly valued and sought after throughout history, particularly in Asia. In Burma, for example, soldiers believed that if the stone was inserted and carried in their own flesh, it would protect them from all injury.

Other cultures have claimed fantastic properties for rubies as well: that they could cause water to boil; that possessing a ruby could allow one to live in peace with his or her enemies; even that the stones drew other wealth to them, bringing greater prosperity to their owners.

Rubies have classically been associated with royalty and high society, and they demand a high price. For example, when Elizabeth Taylor’s jewelry collection was auctioned at Christie’s in 2011, one of her ruby and diamond rings sold for $512,925 per carat – a world record. The ring had been a Christmas present to Liz from Richard Burton.

And just like diamonds, rubies have attracted their fair share of thieves. No one has seen the Liberty Bell Ruby since 2011, when it was stolen from a jewelry store in Delaware. First found in Africa in the 1950s, this ruby was the largest mined jewel of its kind in the world – shaped into a miniature replica of the Liberty Bell, it weighed in at four pounds.

As you celebrate this month, be proud of your birthstone. The ruby plays second-fiddle to no one. After all, Dorothy wasn’t wearing sapphire slippers, was she?

May is the last full month of spring, a season that brings us warmer weather and blooming flowers. It’s only appropriate that the emerald, a symbol of rebirth, is the gemstone for people who celebrate a birthday during a time of year that is associated with new life. Emerald is derived from the Greek word …
Read This Story 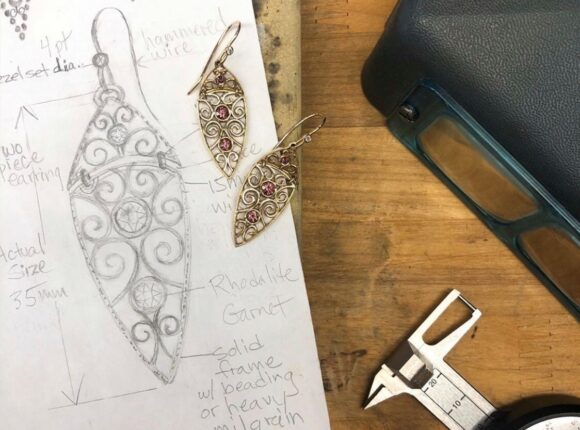 Our hope is that our jewelry is not defined by its price tag or by the way it sparkles from its spot in our display case. We hope what makes an impact is the process of craftsmanship that each piece must move through in order to inspire, delight, and captivate its future owner. What starts …
Read This Story