By her who in this month (January) is born

No gem save garnets should be worn;

They will ensure her constancy,

True friendship, and fidelity. (An 1870 pamphlet published by Tiffany & Co).

Birthstones are not only fun and nostalgic, but throughout our lives they serve as a beautiful reminder of the month when we were born. The history behind birthstones is fascinating, with origins that date back to the Old Testament and Aaron’s breastplate, which featured 12 gemstones that represented the 12 tribes of Israel.

Over time, the 12 gems eventually became associated with the zodiac. Then, in 1912, the National Association of Jewelers established the modern list of birthstones we know today. Because we love these gemstones and the history and lore behind each one, we researched the 12 birthstones and uncovered these fun facts to share with you.

Not all garnets are red, but red garnets, which are the most common, can be found in metamorphic rocks on every continent.

Amethyst is one of the most popular gems in the world, although at one time it was only available to royalty. Today, this purple-colored quartz variety is more affordable and widely available to the mass market.

Leonardo da Vinci wrote that wearing an amethyst “quickens intelligence and gets rid of evil thoughts.”

Aquamarine, the gemstone often thought to represent unity, boasts the colors of the sea, ranging from pale to medium blue — sometimes with a hint of green.

Aquamarine was believed to protect sailors, keep marriages happy and protect the wearer against enemies in war and court cases.

Known as the invincible birthstone, the diamond is indeed the hardest gemstone. Perhaps one of the world’s most popular gemstones, diamonds are formed deep within the Earth and brought to the surface through volcanic activity.

It’s no wonder the emerald is the birthstone of May; its color represents the growth and rebirth of spring. At one time, people thought emeralds could cure diseases, and others believed wearing an emerald made a person more intelligent and witty.

The first recorded emerald mines were in Egypt; the emerald was well known as one of Cleopatra’s most favored adornments.

A pearl is an organic material made by a living organism known as a mollusk. When the mollusk gets a tiny seed caught in its shell, it takes protective measures to coat the particle with a material known as nacre. Unlike other gemstones, pearls require no cutting or polishing to reveal their beauty.

Rubies draw the highest price per carat of all the colored stones. In Sanskrit, a ruby is called ratnaraj, the “king of precious stones.”

A ruby’s color, available in a range of red hues, is its most important feature, and can significantly affect its value. The most valuable of them all is a rich, red color with a slightly blue hue.

At one time, some people believed that peridot, the lime green gemstone, protected its owner from evil spirits and nightmares.

Peridots are found in lava, volcanoes and meteorites. They have historically been confused with emeralds.

The sapphire was featured on one of the world’s most famous engagement rings – that of Princess Diana.

The Persians once believed that the Earth sat on a big, blue sapphire, which explained why the sky was blue.

In 2008, NASA announced the discovery of opal on Mars. Since opals consist mostly of water, this led them to believe that Mars may have been wet and supported life at one time.

Bedouins believed that opals, with their kaleidoscope of rainbow colors, came from lightning, and that they fell to the ground during storms.

Owning a topaz in Russia was once restricted to the royal family, accounting for the origin of the name “imperial topaz.” Ancient Greeks believed wearing a topaz could make you stronger – and invisible.

Topaz boasts a wide range of colors, although the golden orange-yellow topaz is the most valuable.

Turquoise only forms in the most barren and dry places on Earth. Although turquoise is an opaque, light to dark blue color, it may contain tiny veins of other materials that form an intricate, spider web-like pattern.

Apaches believed that attaching a piece of turquoise to a rifle or bow would improve accuracy.

Note: Many of the months have alternative birthstones, such as June (Alexandrite), October (Tourmaline), November (Citrine) and December (Blue Zircon).

Jeff Johnson & Co. is a full-service jeweler located in Upper Arlington, Ohio. We specialize in custom engagement rings, keepsakes for significant moments and giving new life to family heirlooms. Our gemologists are trained by the Gemological Institute of America, and they work closely with each customer to ensure that we meet your vision and beyond. Stop by our showroom at 5025 Arlington Centre Blvd. (off Henderson Road), call 614-459-8890, or visit www.jjandcompany.com. You can also follow us on Facebook at Jeff Johnson & Co.

Bringing You the Inside Story

At Jeff Johnson & Company, we believe our customers should understand how we create beautiful jewelry. That’s why we’re hosting our first-ever in-store event on Saturday, April 18. During the event, which runs from noon to 5 p.m., our expert goldsmiths and designers will be manning various work stations and demonstrations that feature the following: …
Read This Story 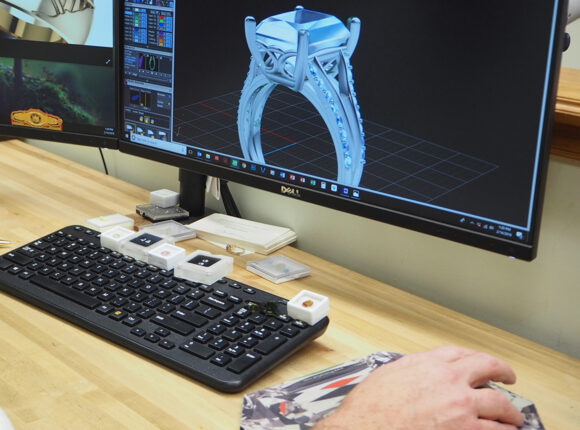