Garnet: January’s Birthstone Has a Rainbow of Colors

If you were born in January, you’re in luck. You have a variety of colors to choose from when it comes to showing off your birthstone, the garnet. This gemstone is certainly an elegant addition to a ring, necklace or other piece of jewelry, but there’s much more to this precious stone than meets the eye.

What Makes a Garnet

Garnet, which is found on every continent, is actually the name of a group of related minerals. Although all garnet has a similar crystal structure, it is the chemical structure that differs and yields the vast array of colors. It is most commonly discovered in metamorphic rocks, which are rocks created by physical or chemical changes resulting from extreme heat and pressure.

Most people recognize the garnet as a deep-red gemstone. In fact, red garnet is the most common and abundant of all the types and colors. It is often used in jewelry and has a long history as a decorative stone, even showing up in ancient Egyptian and Roman jewelry. Depending on its transparency, garnet can exhibit various shades of red, purple, orange, yellow, brown and nearly black. Green garnets are becoming highly sought after because of their incredible brilliance. Some closely resemble emerald, and they are especially popular and rare.

If you are celebrating a January birthday, you should be proud of this colorful and versatile birthstone. It has undoubtedly impacted your life in one way or another. 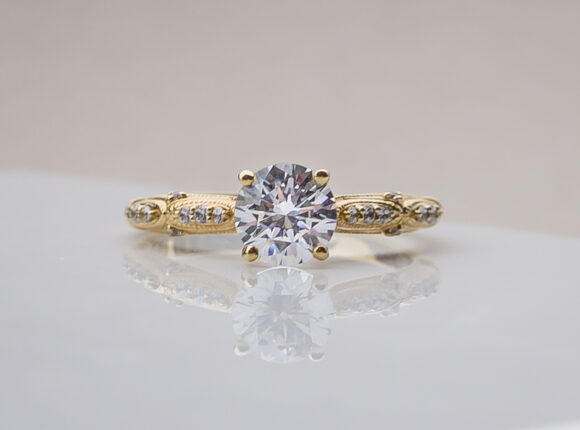 How to Care for Your Engagement Ring: 5 Do’s and Don’ts

Whether you are newly engaged (congratulations!) or have worn your precious token of a promised future for many years, these five dos and don’ts pack a lot of punch for proper ring and fine jewelry maintenance. One. DON’T Clean your home with your ring on, and be sure to always avoid chlorine. Harsh chemicals wreak …
Read This Story

The Perfect Gift for Any Bridesmaid

When someone agrees to be in your wedding party, that person is making a big commitment. In addition to showing support for your impending union, she agrees to devote a substantial amount of time—and some of her finances as well. It’s no wonder gifts are a customary and gracious way to thank wedding attendants. While …
Read This Story